I was really looking forward to the Thursday night dancehall vs. hip hop party at the Vudu Lounge downtown. Chandra, Jørn, and I went out for dinner and then Chandra and I went over to the club to danceparty. Moses from Germany, Serghino and Nanette from Holland, and Rodney from Ghana joined us to “hear Cape Town's finest DJ's on rotation as they [brought us] the latest in Dancehall vibrations bumping against the best of Hip Hop jams!!!!” Thanks for the nice night out everyone!

What superlative could I use to express the anticipation I had building up inside for Friday night? I don’t know but I do know that it all started earlier that week on Monday, incidentally Women’s Day in South Africa, over dinner with Chandra, Marion, and Rebecca. Plans were hatched to throw a bednets fundraising house party over a delicious curry dinner that Chandra had cooked up. We were going to sell raffle tickets to raise money and had a good 2-hour long brainstorming session to think of prizes we could raffle off.

Here is an excerpt of my personal favorites:

A Facebook event was created—Get buzzed, save lives mosquito bednet house party—and notice was sent out by more traditional means (SMS and e-mails). It was hard to guess but we were figuring about 20 or so people would show up.

The first guests arrived around 9 pm, and we sold a batch of raffle tickets: 1 for ten rand, 3 for 25 rand. The party really started to get going though around 11 pm when Serghino showed up. The previous night he had offered me a beer but completely forgot about it when he went to the bar. The next morning he woke up and suddenly remembered "I think I forgot to get that beer for John!" When he walked in the door, he had a nice cold big bottle of Black Label beer for me. Thanks Serghino!

The raffling was underway and we had our very first winners. In fact, it seemed like Paul kept winning all the prizes so we made him draw tickets, then he would automatically be disqualified from winning. A special thanks to Jess and Erik from Nice for donating a free facial message at their beauty salon, La Fée Beauté, to Paul from Blue Collar, White Collar for donating a designer shirt, and to Rebecca’s dad, a famous local food critic for inviting a winner over for dinner one night! Thanks also to Tarjei Langeland for doing the photo shoot, you’ve got talent Tarjei, keep it up! 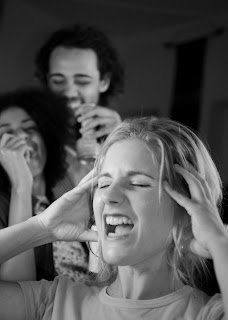 At least 30 people showed up and they didn’t leave as early as we thought. With the dance floor thumping, a professional darbuka (North African drum) player named Cid gone rabid with the music (too much time with Rex), raffle drawings at regular 15 minute intervals, the photo booth churning out stills and more than 60 prizes to raffle off, people didn’t clear out until 4 am!

Thanks to everyone who came and participated in the raffle. Together, we raised $76 which will buy 7.6 bednets and protect 7.6 families (don’t worry .4, we’ll get you a bednet too!). A special thanks to Denga from Malawi for buying enough raffle tickets for one bednet, to everyone who will be donating their time to fulfill their prize commitments (Siri, Chandra, Marion, Rebecca, Jørn, et al.), and to Marion and Chandra for hosting such a marvelous party!

One lucky winner was entitled to a happy belated birthday song in Norwegian:

What can I say after such an exceptional night? Table Mountain was pretty, the view spectacular; do go if you get a chance some day. On Sunday, I was at the airport again with a quick layover in Jo’burg, just enough time for morning KFC (it is finger licking good, isn’t it?), and then on to Mada.