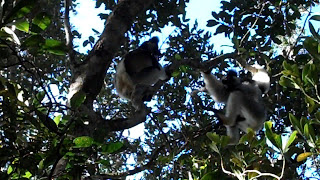 Paul took me into town Thursday morning on his way to work and dropped me off at a bus stop, so I could get to the main bus station. Three bus rides and nearly an hour later, exasperated by the impression I was going in circles, I hopped in a cab. Thirty more minutes, then one hour of waiting for the taxi-brousse (mini-van) to fill up and we were on the road.

We stopped for lunch after a couple of hours (more like dunch as it was nearly 4 pm) and I met two other tourists from India, Prabhakar and Lakshmi, who were sitting in the back of the mini-van. Prab works for the UN in Ethiopia but has worked around the world, including North Korea. That makes at least four people I’ve met in the past three months who have been there!

The bus dropped me off in Andasibe and I walked down the road to a local lodge where I would spend the night. On my way I ran into Jean-Claude who offered to be my guide in the national park the next day. Ok!

It turns out that Prab and Lakshmi were spending the night in the same lodge, so we had dinner together. It was nice hearing all about their travels. They left Ethiopia and had been on the road touring Africa for a few months now. Mount Kilimanjaro, gorillas in the mist in Uganda, Rwanda and more. Apparently, it costs about $1000 for a permit, per person, to see the gorillas. If you’ve ever dreamed of doing this, start saving!

Up bright and early the next morning to meet Jean-Claude at the entrance to the park, along with Prab and Lakshmi. The first thing we saw was a really hard to see chameleon, followed by tree frogs, some rubber trees, and finally some lemurs. The first lemurs were small and gray, but later on we saw some big, furry, black and white ones. We switched our cameras on to rapid fire and got carried away, using up all our memory. Mine even overheated at one point and I thought I was going to lose everything.

After the novelty wore off and it started to get hotter, we called it a day and went back to the ranger station and gift shop. I bought a few things for Louis, parted ways with my company, got my things at the lodge, and went back to the main road to hitch a ride to Toamasina.

I tried to negotiate the price with the driver of the first mini-van that stopped, but failed miserably. Oh well, I’ll take the next one. What luck! The next mini-van to stop was taking a famous Malagasy rock group called Mage 4 to Toamasina for a couple of concerts they were giving over the weekend. I hopped in, we introduced ourselves, and then started drinking rum!

A great ride talking with famous rockstars, telling jokes (remind me to tell you the one about Santa Claus... thanks Ken!), and singing songs. Thanks again Mage 4 and definitely see you at the concert tonight!

When we arrived, Jimmy, Marjeanne’s boyfriend came to the station to pick me up. I met Marjeanne, a member of JCI at the World Congress last year in Tunisia. Marjeanne is working for a big mining project that will start extracting cobalt and nickel and provide a big boost to the country's economy. Jimmy told me all about his upcoming plans to open a VIP karaoke bar. 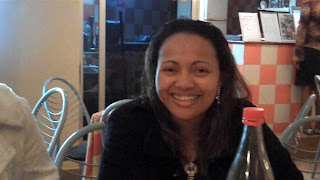 In case you have noticed yet, the Junior Chamber International has members around the world. In fact, the vision of the association is to be the leading global network of young active citizens. A network only works if you rely on it and render service when you can. This reinforces the links that connect us. Indeed, I hope that my travels and visits will bring us closer together, create new opportunities, and allow us to learn from one another and grow. Speaking of opportunities, my good friend Ghislain in Cameroon is looking for a partner to open a training institute in Cameroon with him.

Later that night, we all went out for dinner with other members and former members. It was nice to hear about their local projects and more about the political situation in Madagascar. I also got a chance to invite them to attend the JCI Challenge that Pays Niçois is hosting next year!

We finished dinner and then went over to the the Chinese Congregation for the Mage 4 concert with Zazah, Angelo and Tuv. It’s really nice going to a show when you know the tour manager and everyone in the band. It kind of makes you feel like a rockstar too. 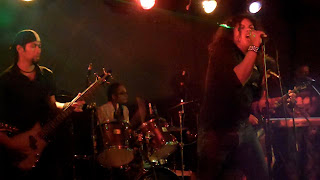 We stuck around for the second band, finished our second bottle of whisky and then met up with some other friends at the Neptune, a local night club. Dancing was great but we were getting tired, so we all left and went to Anja’s karaoke bar. Anja, another JCI member opened up especially for us and we hung out at the bar, talking and laughing until the sun came up!

I headed north the next morning with Zazah to Mahambo to check out the surf scene. Mirana Olivia from Tana had tried to put me in contact with a surf school so I could learn how to surf. It turns out the owner is Valérie’s brother, Fred, who is now in New Zealand; I’ll catch up with you there Fred!

When the taxi-brousse dropped us off, we had a 5 km walk to the water. I adjusted the straps on my backpack and we must have walked 20 meters when a truck stopped by. The driver offered to drop us off somewhere. It turns out that he was the owner of the hotel we were going to and on top of it all, he was from Nice! 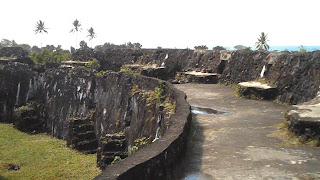 Not much excitement in Mahambo, so the next day we went back towards Toamasina, and stopped off in Foulpointe. Unfortunately, we would miss the Three Horses Brand beer festival starting the following week, but we would still go visit the Fort Manda which is one of few forts in the world built of coral, sand, and egg whites. When Zazah was telling me we should visit the fort made of eggs, I was initially imagining a giant fort built of eggshells!

That night, we met Priscille from Mauritius who runs a Montessori school in Tana and Eliot, an architect and former French legionnaire. They joined us for a drink which later turned into a fish and chips dinner on the beach prepared by a young local entrepreneur. The next morning, we had a breakfast of fresh clams in shallot vinegar at a beachside shack and then it was time to hit the road! 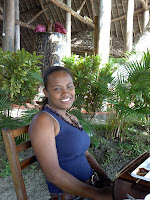 For my last night in Toamasina, I gave a similar JCI presentation to the one I gave in Tana, then we all went out to sing songs at a karaoke bar. As you can see, the Malagasy are crazily fond of their karaoke.
A big thanks to the members of Mage 4, the JCI members of Toamasina, Marjeanne, Jimmy, Angelo, Antonio, Tuv, and everyone else for making this such a memorable experience. A special thanks to Zazah for accompanying me up North. Best of luck to all of you and see you soon I hope!