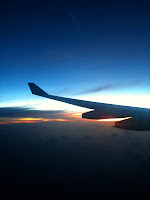 Have you ever had one of those dreams that make you do things unwittingly? I did, on the flight from Japan to Australia. At one point, I reached out to grab my neighbor’s hand. I was in a daze but I think he pulled away his hand. He didn’t speak to me for the rest of the flight. I think I made him feel uncomfortable.

I was originally supposed to stopover on the Gold Coast, but the pilot had a problem so they put everyone on the flight to Cairns. I had never heard of this place before, but it seems quite nice: great barrier reef, tropical rain forest, salt water crocodiles, and tiny jellyfish that sting like a bee with rabies. Nice, except for the jellyfish and crocs.

I arrived in Sydney and left almost immediately for Manly, a quiet beach town a short ferry ride across the bay. I met up with Adam and Fran, my hosts, and we got ready to go for a swim at the beach.

Adam grew up in Tasmania and Fran in Detroit and they met up through the magic of couchsurfing! Adam is now a successful headhunter in Sydney with a couple of on-line ventures while Fran recently left the retail merchandising business to move to Australia. Interestingly, Fran lived in Chicago and after we became Facebook friends, I soon realized that she’s friends with people who are friends with one of mine, Molly E., from Minnesota. The world is contracting people.

We went for a nice swim that afternoon, then back to Adam and Fran’s for a BBQ and beers before Will's wife’s birthday party that evening. We were enjoying our drinks on the terrace when Fran scared the wits out of me by telling me to keep an eye out for the deadly red-backed spider that could kill me. Apparently, there are quite a few around the house.

Time to celebrate at the hippest club on the beach, the Shore Club! When we got there, Adam and Fran went up to the private function and I stayed downstairs for a while. I got my first drink, but my credit card was refused. The man in line behind me blurted out, “Don’t worry about, I’ll get his drink. I’m really impatient.”
“Are you sure?” said the bartender and me simultaneously.
“Yeah, no worries mate.”

I thanked him and we started up a conversation that continued for a good hour or so. Ian was from London and in the debt collection family business ever since he was a wee lad. By debt collection, I think he meant loan sharking because it didn’t sound pretty some of the things he had done. In fact, he was looking for ways to atone for what he had done in the past. Now, he was working as an account manager for a major IT firm and was very successful. But that didn’t seem to make him all that happy. I told him about my work and what I’ve been doing in my community with JCI for the past few years and he was inspired. So inspired, he insisted on buying me drinks all night. Thanks Ian, I enjoyed our conversation and hope you find what you’re looking for.

Ian introduced me to an oilman from Northern Ireland and after chatting a while, he too wanted to buy me a drink. Were it not for the conversations and vague hints at Ian and this other guy's interest in women, I would have thought I was getting hit on by men all night!

I eventually went upstairs to the private party, met some of Adam and Fran’s friends and ate some pizza. Then we all went down to dance the night away.

We kicked it on a smaller beach in a cove on Sunday before heading to the Newtown music festival in the afternoon. Then I made a poulet aux morilles (sans morilles) for dinner.

Finally, Monday and surf lessons! The weather wasn’t so nice but all the better. There were only 3 of us with the instructor. The waves were perfect for learning too. Needless to say, we were all getting up on the board after just a few attempts and surfing! What a thrill, feeling the power of the waves through your entire body.

Thanks again Adam and Fran for hosting me in Manly. I had a great time with you and look forward to seeing you both again soon!

Next stop: Sydney (this time for sure) and Stockton Beach, Newcastle!
Posted by John Di Rico at 4:06 PM