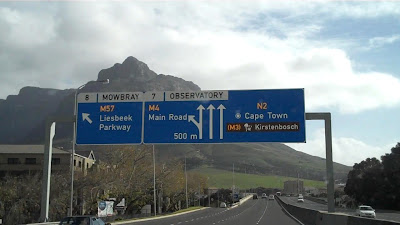 Cape Town was going to mark another first of this journey. This would be the first time that someone I had met during my tour would put me into contact with one of his friends who in turn would offer to host me. Not sure that makes sense, so let me explain. Remember back in Berlin when I met Pat in his art studio? We exchanged emails, and Pat put me into contact with Chandra, a Dutch friend of his who is finishing her master's thesis in international law and studying art history and French in Cape Town. By the way, she is actively looking for an internship or job opportunity. If you have any leads, please let me know!

I got in late afternoon, met Chandra and Rex, the dog who belongs to the owners of the house she is renting (famous jazz musician Mervyn Africa) as well as Siri, Chandra’s Norwegian friend who is studying journalism. There was something special about Norway in Cape Town because I didn’t stop meeting Norwegians. Two more Norwegians, Jørn and Oyvind, stopped by with their bicycles to put them in Chandra’s garage, then we all went for a bite to eat.

This is where things got really interesting. Jørn and Oyvind, along with their friend Andreas, whom I wouldn’t meet until later, had just arrived in Cape Town after cycling almost a year from Oslo! Oslo - Cape Town, that’s amazing. 24 years old, all three of them. Bravo gentlemen! I was sorry to hear that Jørn had picked up typhoid fever in Ethiopia and you all got wretchedly sick after eating rotten meat, but comforted by the fact that you made it to Cape Town alive and well. Remember, if doesn’t kill you, it will only make you stronger! Again congrats on a great feat and best of luck to all three of you with the rest of your studies and whatever the future holds in store for you!

I made some pasta salad for the three of us, and some crêpes, and then we set off with the crêpes to Marthe and Marejke’s for a house-warming/birthday party. There were a lot of really nice young people from around the world who were studying at the University of Cape Town. I met an Italian surfer who is also signed up on www.CouchSurfing.org and has hosted several people and a very nice translation colleague from Amsterdam, Nanette. After the crêpes ran out, someone had the fantastic idea to make pancakes. I was skeptical at first about having one, feeling full from the great potluck, but after seeing them fresh off the griddle, the flamed banana topping, and chocolate spread, I couldn’t resist. Thanks to whoever had that great idea! 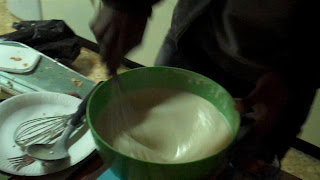 Chandra and I left towards the end to go see a friend of hers, Leroy, who runs a local jazz bar a few blocks away. Somebody will have to correct me if I’m wrong but I think we were really close to or in District 6. This may remind you of a recent South African movie called District 9. In fact, this movie was inspired by history when over 60,000 inhabitants were forcibly removed from District 6 starting in 1968 by the apartheid regime. Check out this article to read more about this tragedy. By the time we got back to the party, everyone had left except Marion so we grabbed a cab and went home! 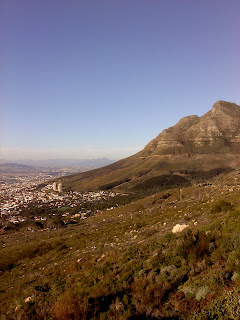 The next day, I met up with the Norwegians again to go up to Table Mountain, but unfortunately the power went out on the cable car so we weren’t able to leave the base station. It was a nice chance to get out anyways and find out more about their trip!

On Wednesday, I went down to the waterfront to see the wharf and downtown area. I had just settled down outside on a café terrace, had an espresso in one hand, The Economist in another, when all of the sudden a deafening boom rang out. Conversations were put on pause, the lone coffee drinkers like me made dumbfounded eye contact with the those around them, and then people started to precipitate to the source of the sound. Two men driving a small utility vehicle had run into a wall, right next to a high pedestrian traffic staircase. Luckily no one was hurt, though the driver and passenger looked a little dazed and confused and the vehicle even worse. 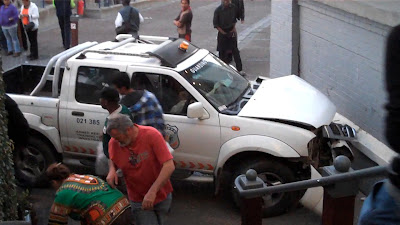 After finishing my coffee, I walked past the World Cup stadium and got a table at Il Doppio to wait for my friends. Remember back in episode 8 when I stayed with Janet and Enrico? Well, it just so happened that they were on vacation with their son in South Africa, and were flying back to Amsterdam the very next day! Chandra joined us for dinner and Marion came at the end, then we went back home. Nice seeing you again Janet, Enrico, and Antonio! 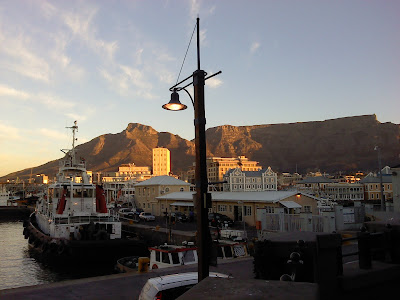