Like I had mentioned in an earlier post, I was very successful using www.couchsurfing.org for the first time. More than four families had offered to host me and I was moving on to my third and final family in Jo’burg.

Carol dropped me off at the bus station and I rode into Sandton to get the Gautrain, this time alone (see first Jo'burg post about drive by bus shootings)! Tammy picked me at the Rhodesfield train station and we went back to her home to drop off my bags. Tammy’s half-sister, Claire, was home from school and decided to go out with us to do some shopping.

Later that night, Wendy, Tammy and Claire’s mom, Kobi, Wendy’s boyfriend, and Sharon, Tammy’s friend, joined us along with Wendy and Kobi’s four friends from Belgium who had just arrived for a three-week long vacation in South Africa. We had a lovely dinner followed by ice cream sundaes with a secret chocolate sauce. Actually, I’m not sure it is a secret, so I’ll share the knowledge: melted milky way candy bars with milk chocolate. Drizzle that over some nice French vanilla ice cream and you’ll be in heaven.

Emile Singeh from Cameroon had put me in touch with some fellow Jaycees from South Africa and I was finally going to get a chance to meet up with them during their mid-year recharge. I invited Tammy to join us and we set off early Saturday morning for the meeting after a crêppy breakfast ;-) 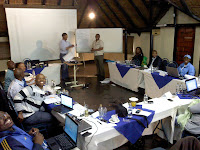 The weekend was the first of its kind for the JCI South Africa National Board and local presidents. The goal of the weekend was to evaluate what had been accomplished so far this year, plan for the rest of 2010, and start looking forward to 2011. We had a couple break-out sessions which consisted of SWOT analyses (Strengths, Weaknesses, Opportunities, Threats) of different internal aspects of the association. I also had the honor to do a brief presentation about the the Nothing But Nets campaign and why I was in South Africa.

I must say that the fun highlight of the day was the warm up before the afternoon session. We went around the room saying famous company slogans or taglines. Then each person had to repeat their slogan, right after saying the phrase “under my underpants”... Thanks for the great laugh with KFC's “it’s finger lickin’ good”!

A big thanks to Ali, Tshepo, Michelle and everyone else for such a wonderful day. I wish you all the best of luck for the rest of the year and next and look forward to seeing you in Osaka in November! 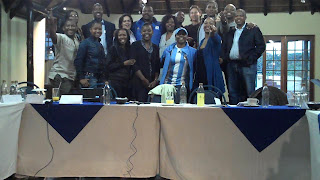 Tammy had left earlier in the day, so I went back via the train. I figured it would be a good idea to use my Gautrain credit as I had foolishly purchased about $50 worth of it! The rest of night we enjoyed some of Tammy’s delicious Elvis hamburgers and karaoke. Thanks for the recipe Tammy (please contact me if you want it, they're honestly the best burgers I've eaten)! 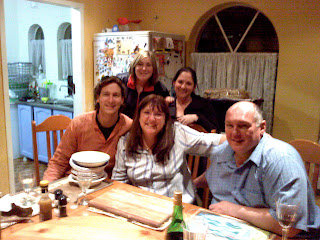 Next morning, I was back at the airport and off to Cape Town already. Thanks Wendy, Tammy, Claire, and Kobi for hosting me for these two nights. That’s two more bednets and two more families protected for the next five years.