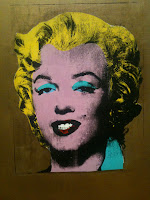 On Sunday afternoon, I left John’s place to meet up with my new hosts, Charles and Liz, at the Museum of Modern Art. John lent me his university ID so all three of us could get in for free. Thanks John! I was really surprised by all of the beautiful women I saw, “just waiting to be picked up, picked up” (I’ll send you a post card from Estonia if you can figure out what song this comes from).

Later that night, we went for a gourmet meal in one of Liz and Charles’ favorite restaurants called, Momo Fuku. They told me about their work and travels: Liz works for a handbag design outfit and Charles works from home as a day trader. They were recently in the Galapagos islands and will soon be traveling to Barcelona (lucky!).

On Monday, I went up to Harlem to run a private Wordfast training and on Tuesday stayed in downtown for the training. Why is it that every time I’m on the Eastern seaboard during the winter, I always get a snow storm, blizzard, or ice storm? Impossible for some people to get to the training, difficult for the trainer as well! 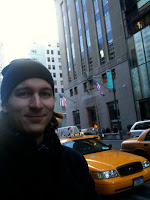 On my way there, when trying to hail a cab, I asked the guy who arrived after me where he was going and if he wanted to share one. It turns out he was going in the same direction, only farther! When I got out, he insisted that he’ll cover it and thanked me for letting him share (cabs were few and far between in light of the ice and flooding conditions).

We managed to have the training but got off to a late start. A big thanks to Kristyna from Wordfast for inviting everyone for lunch!

One more night before leaving and I took Liz and Charles out for dinner. I had been dying to go to La Bonne Soupe, a restaurant my Aunt and Uncle recommended to me about 15 years ago. I was 16 years old when I went there for the first time with Dave M. during a high school theater trip. We had the lunch menu which consisted of a salad, bread, soup, mousse au chocolat, and wine or coffee. When the young waitress asked with her thick French accent if we wanted wine or coffee, I replied wine. We were amazed, getting served wine in a restaurant when you’re only 16 years old considering the fascist liquor laws in the USA.

We walked home that night and saw a few sights: Rockefeller Plaza, the MET... Thanks for showing me the really cool whispering echo effect at Grand Central Station! 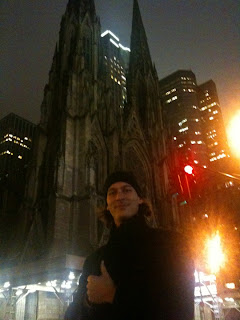 The next day I was on the Amtrak train to Washington DC (with a slight weather delay, go figure). Thanks again to John, Liz, Charles, and their respective roommates/family for hosting me. Thanks also to all the Wordfast trainees and Kristyna! See you soon, but definitely during the spring, summer, or fall!