The first days on (in? never know what to say) the Gold Coast weren’t too eventful. My hosts on Broad Beach, Adam, Jean-Michel, and Longy were busy working most of the two days I was there while I was at the library or mall food court (free wi-fi before I realized I could go to the library). What I couldn’t help noticing was the youth. Teenagers everywhere! This is normal, my hosts reassured me, it’s schoolies week.

Fantastic, shoolies week. Partying with underage high schoolers! Well not really. I did go out with some couchsurfers one night after dinner at a vegetarian restaurant, but I couldn’t get in anywhere; wearing shorts didn’t help, but it was mostly because I didn’t have my ID. I should have known better, I mean I could have fooled myself passing for a 17 year-old.

On Friday, I changed hosts. Michael, one of my new hosts, picked me up and we went to his place in Burleigh Heads to drop off my things. I met Tom, Michael’s roommate but we didn’t have much time to chat. Michael had an extra ticket to a Movember party in Brisby and we had to hit the road.

Before telling you more about Movember, I want to tell you about Michael. Michael’s attitude really impressed me. He had lost one of his best friend’s a year ago in a bicycling accident. Michael got a “no tomorrow” tattoo on his arm and is living life to its fullest, staying positive, and seizing the day. I hope you get a chance to meet him when he moves to Europe next year to explore, live the best days of his life, and smile.

Movember? Throughout the month of November, men in Australia get sponsored by their friends, family, or co-workers to grow a mustache. All the money they raise helps fund research for men’s health (prostate cancer, etc.). Sounds like a sexy party! After sporting a mustache for nearly 5 years, I must say I was disheartened by the untimeliness of this party.

Imagine a party with hundreds of mustachioed men dressed like the Village People. I’ll let the pictures do the rest: 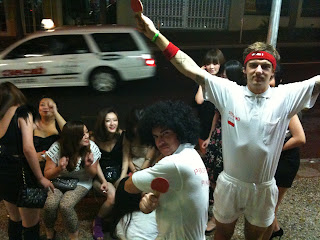 I met some nice people at the party, including Michael’s friends Beau, Daniel, and Tom as well as Joyce and Lisa. Afterwards, we went to an exclusive bar and Michael couldn’t believe they let us in. Him and Beau were dressed as professional Polish ping-pong players mind you.

Next stop, a night club to dance the night away with more friends... I stepped outside after 3:30 am to say goodbye to someone, standing right next to the door. Little did I know that after 3:30 it’s lock out in Queensland which means you can’t get back into bars or clubs once you leave. Rats!

If you ever take a drive from Brisby to the Gold Coast, or vice versa, be sure to stop at Yatala Pie Shop for the best mince pies ever, especially after a long night of partying.

Saturday night, Michael and Tom’s friend Sam was celebrating her 23rd birthday up in Surfer’s Paradise. Nice, another fun house party with lots of nice people, glow sticks, goofy hats, and dancing. I was really happy to have met Sam’s roommate Sara and hope to have her come to France the next time we need a face painter for a street painting festival! Thanks for the great party Sam! 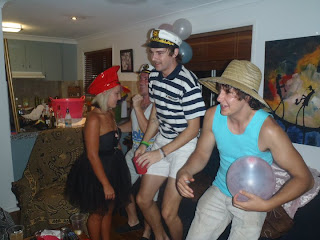 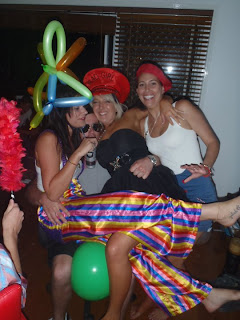 One more day in Australia, enough time to laze around, watch Super Troopers, eat party leftovers, and hang out at the beach with Joyce.

An enormous thanks to Adam and roommates for hosting me at the beginning of my stay and to Michael and Tom for the last two days (even though we never technically slept at your place:-)! That’s another 4 bednets and 4 more lives protected from malaria.

Looking forward to seeing all of you in Europe soon!!!