This would be my first time returning to Southeast Asia since I left Vietnam in 2005. I was excited since I had never been to Kuala Lumpur, or KL as everyone here calls it, or anywhere else in Malaysia for that matter. I was expecting a hot, humid mix of Thailand and Singapore and wasn’t let down.

I made it to my hosts’ place, Ang and Wenwen, by late morning and we had breakfast together in an Indian food stand next to their apartment. Ang recently graduated from the university and has started practicing law while Wenwen had just found a job as an accountant. Congrats to both of you! They had movie and mall plans that day and offered to take me along. Great!

As it so happens, I had been in contact with Brian Lee from JCI Malaysia who was helping organize a cut-athon in the Sunway Pyramid mall just outside of KL. Hair dresser students would be cutting people’s hair all day long for 10 RM (about €2.50) to raise scholarship money for underprivileged students. For those JC's who don't know Brian, you probably should. He's everywhere on Facebook but more importantly, a very active member of JCI Malaysia! Great meeting you JC Brian!
We picked up Wenwen’s sister at the university, met JC Brian at Sunway and got a quick trim (just the back please!) at the cut-athon. Then we went to see the latest kung-fu movie, Legend of the Fist, a quasi-sequel to Bruce Lee’s legendary Fist of Fury. I assure you, it was action-packed, butt-kicking fun!

We stopped at the archery range in the mall to shoot some arrows (thanks JC Brian for the coupon!), then went to an outdoor food court for Chinese food and drinks. I think all of us were full but Ang insisted that we try the cheesy wedges at KFC since I couldn’t get them at KFC in the USA. Sure, why not!

Sunday was a relaxing day, a little more shopping, this time at the Mid Valley Mega Mall but before that, we celebrated Hari Raya. This is a muslim religious tradition where people invite you to their homes one day between the end of Ramadan and Eid to visit and celebrate with each other. I tagged along with Ang and Wenwen to one of their friend's homes. It was very nice to partake in this and learn more about Malaysian muslim traditions.

On Monday morning, I had big plans. I had just finished reading Richard Branson’s auto-biography and on the flight over, flipping through the in-flight magazine, I saw an advertisement for the Invest in Asia forum and guess who was going to be a guest speaker? That’s right, Sir Richard.

Entrance to the event was $1000, just the kind of money I didn’t have, but I figured maybe I could catch him on the way in or way out. Unfortunately for me, I had not set my watch right. By the time I arrived and asked where he was, someone told me he had already spoken and left. Rats!

Later that day I was changing hosts. I got my things together, said good-bye to Ang and Wenwen and then went to meet Amy. Amy recently returned from working in the Netherlands as a nanny. She used couchsurfing to discover Europe during her weekends off and the last month of her stay. Unfortunately, or fortunately, she caught a bad case of travel bugs and was already planning to leave in three weeks for New Zealand. She hopes to find a job and settle down there.

I was reminded how difficult it can be for people to move about freely in this world and choose where they want to live and work. I hope that one day we get rid of all these borders and put an end to all these policies that hold us captive in our respective countries.

Amy and I went for dinner at an open-air food court with quite a unique way of serving food. There is an area about 200 square meters in size with tables in the middle and surrounded on all sides by small food stands. You go up to the any of the stands or even multiple stands, place your order, give them your table number and when they bring you your food, you pay.

One more day in KL, time to do some sight-seeing! First an early morning run in the park with Amy, and a mid-morning chat with Amy’s grandmother, which I thoroughly enjoyed.

Afterwards, I went to the KL Menara Communications tower, one of the tallest in the world, to meet up with a couchsurfer named Zack who works there. Zack met me at the bottom and got me up to the top for free. Thanks! This is definitely worth checking out. It’s much better and higher than the view from the Petronas towers’ bridge. Plus, to get into the latter, you have to wait in line early in the morning to snag one of the 100 free tickets that only gets you halfway up to the bridge.

Two other surfers were there at the same time, and we chatted about our travels, where they were going next and so on. Zack then got us into the Malaysian village park so we could see what traditional homes look like and watch a dance concert. Thanks again Zack! Max, one of the couchsurfers, and I even got to dance!

Max and I took a bus to meet Amy at the Mid Valley Mega Mall to see the new Wall Street movie, but first stopped for lunch. It was right about this time that it suddenly dawned on me: my flight was tonight and not tomorrow night! I had kept looking at Wednesday on the paper and forgetting that it was Wednesday morning at 12:45 am. In other words, Tuesday night.

We still had time to catch the movie, grab dinner, get back to Amy’s before heading off to the airport. A big thanks to Amy and her nice family for hosting me for one night and to Ang and Wenwen for two nights. That’s three more bednets to protect a several children for the next 5 years! 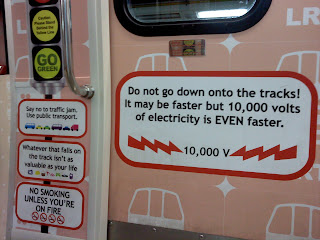