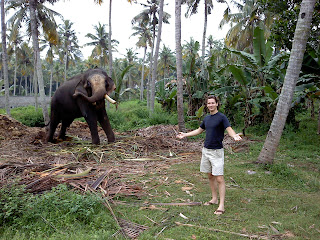 I parted ways on Monday morning with Deni and Bela as they had to return to Bangalore and I was staying a few more days in Kerala. I got to the bus station about 15 minutes before the direct bus was scheduled to leave. It took me about 4 people to figure out where to find it. The last person I spoke to, a young man in his early 20’s, told me it would probably be late. Sure enough, a little over an hour later it pulled into the station. In the meantime, we struck up a conversation. Once we had covered all the usuals (country of origin, job, weather, where I’ve been in India, and favorite Bollywood movie), we started talking about girls.

He told me about the love of his life, an Irish girl he had met earlier this week, traveling through the country with a guitar, a genuine beatnik beauty, fair as a princess with a voice to put Sinead O’Connor to shame. I then surprised the hell out of him by saying, “Sure, I’ve met Paige too.” (Ran into her two nights ago with Alex from Fort Cochi, see previous post). His eyes literally popped out of his head. After several failed attempts to hear her play and sing, she left and he didn’t have a chance to say good-bye. I convinced him to write her a love letter that I could give to her in Varkala if I ran into her.

I had slightly changed my original plans which were to head into the mountains first to see some tea plantations. Tired of all the running around, a quaint beach town sounded like just the break I needed.

The bus dropped me off in the center of town and I started to walk towards the beach area. I figured I’d eventually grab a rickshaw to take me to the Skylark Guesthouse where I would meet Faith and her husband Sanjee who would be hosting me for a couple of nights. Then I spotted a post office and remembered that I needed stamps.

About 15 minutes later, I was back on the street and had just started negotiations with a rickshaw driver when a white woman approached to make sure I wasn’t getting ripped off. Then she looked at with a puzzled expression and said, “John?”

“Faith?” I replied. Faith wasn’t expecting me for another day or so. I explained how I had changed my plans and figured I would rent a room at her inn for the impromptu days I was there. “Ok, no problem!”

Faith is originally from Washington state in the USA and has been in India for a few years. She married a local man, Sanjee, from Varkala, and they are now running a guest house together. I really liked a couple of things Faith has up on her CS profile: 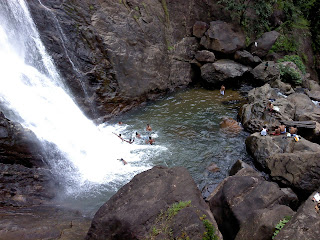 As for Sanjee, he’s a trained chef and thus an excellent cook, but by no means megalomaniac. in fact, he’s rather laid back. He whipped up an delicious spicy red curry the first night I was there.

The next day, I went with Sanjee and two other guests, Tosh and Natasha (the puns and figures of speech were really fun: it's Tosh, not Tasha!) from Canada, on a day trip to a waterfall in the mountains. It was a wild day. Not the Canadians, they were tame; it was the two elephants, a snake, millipedes, and monkeys that kept us on our toes.

After a refreshing dip in the waterfall and gravity-induced aqua shoulder and neck massage, we went for lunch. What luck! It was a very special day in the region, a day to commemorate a deceased guru, so the village we passed through on our way to lunch was preparing a communal meal in the park. We joined about 50 others as the guests of honor for a spicy curry and rice dish, cooked on the spot in the biggest pots I’ve ever seen and served on a banana-leaf. 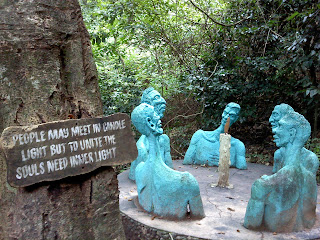 It was another one of those eat and run affairs, we were off before they had time to cook dessert. We cordially thanked them, snapped a few photos, and then went to an eco-tourism park to walk through a sculpture garden. A dense, sticky, storm haze oozed in by mid-afternoon and we got the feeling that rain wasn’t far behind. So we picked up the pace, got in the rick with Sanjee and headed back—in a torrential downpour.

The next days I hung out with another couchsurfer from Texas, Chris, who had studied art at Yale (sculpture) and was working on a museum project in Delhi for the past 5 months. He had pretty much finished up and was now taking some long-needed vacation before heading back to Austin. 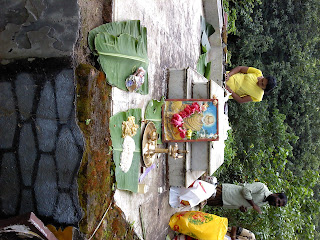 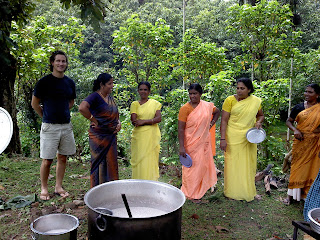 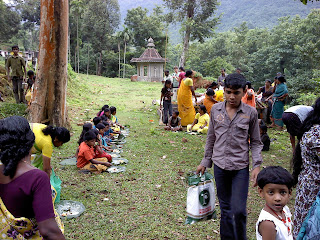 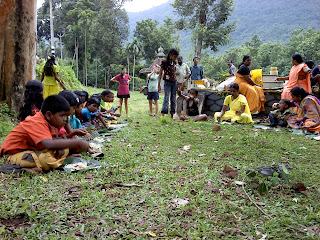 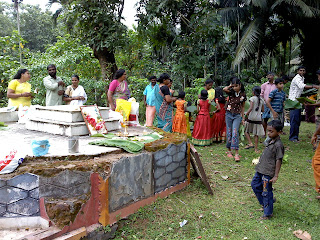 Just a few last words on Varkala. I’ve never been to a place quite like it. You have to imagine standing on a 50 meter high cliff overlooking the ocean with a few scattered beaches below but hardly any beach at all. You are standing on a foot path that runs for a little under 2 km along the cliff’s edge and behind you are small restaurants, guest houses, and souvenir shops. Not too overbuilt, no cars, no noise... it’s just right.

Thanks again to Faith and Sanjee for hosting me a couple nights in Varkala. Drop in and stay at their guest house if you ever make it there. They really make you feel at home: they write your name on your door in chalk, let you use the kitchen to cook your own food, have a great collection of books and movies, and even play scrabble with you in the early evening.

Next stop: Bangalore!
Posted by John Di Rico at 8:05 AM