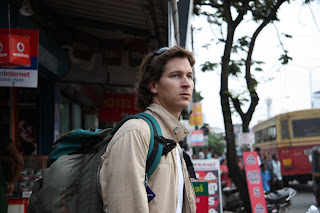 As we stepped out of terminal and walked towards the bus in the sweltering heat of tropical India, I couldn’t resist the fresh squeezed sugar cane juice stand—it’s been ages! The best fruit juice in the world, plus it’s healthy (I think). We took the bus into town and got off in in the outskirts of Ernakulum to meet up with Steve from www.CouchSurfing.org. Unfortunately, we couldn’t get in touch with him so we took another bus and rickshaw to the ferry terminal to cross over and spend the night at Fort Cochi.

Fort Cochi is an old trading post along the tea and spice routes. It was ruled by Indians, the Portugese, the British and probably a few more in-between. Now it is a sleepy fisherman town and tourist attraction. We checked into a hotel and then went out to a bar for drinks. 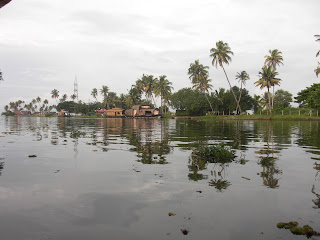 We had a late lunch so we skipped dinner altogether. After a few drinks, some other tourists started to show up. Mike, a former financial portfolio manager from Hawaii, recently left it all behind to teach in Thailand and would be traveling around India for a few weeks before the semester started promoting his new website www.powerkickinc.com. A Scottish girl from Glasgow who insisted that it was not a good idea for a girl to travel alone in India (especially in Delhi) after experiencing it first hand for the past few months. Apparently, she almost got gang raped in Delhi which explains the hard feelings. Then there was the Australian girl who was on a round-the-world trip and was traveling around India on a motorcycle. Cool.

Up early the next day, we hopped on a bus and rumbled on down to Alleppy, the gateway to Kerala’s famous backwaters. I was engrossed in my book, Losing my Virginity (Richard Branson’s autobiography) for most of the ride, looking up from time to time to take in the scenery. At one point, when we had almost reached our destination, I spotted a JCI banner with a picture of Roland Kweiman, this year’s world president, on it! Wow, JCI is truly everywhere, even in the most remote, “backwaters” places like Alleppy! 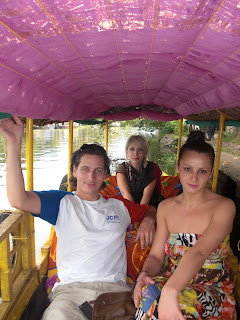 That afternoon, we checked in with Antony, our CouchSurfer host who owns a tourism business and resort: http://tourinalleppey.com/. We had a cup of coffee and then he sent us out on a relaxing canoe trip.

The backwaters gets its name from the 1,000 km of canals and rivers that intertwine in a dense tropical fruit tree paradise. Also a tourist photo-happy paradise (thanks by the way to Bela and Deni for all the photos!).

By the time we made it back to our residence, it was dark and we needed to make plans fast. Antony and his Finnish girlfriend decided to join us for dinner so we all went to a nice hotel for cocktails and Indian fare. 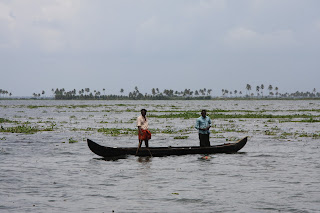 Rarely have I relied on guidebooks for my travels so far, but I do look into them from time to time, especially when one is readily available (thanks again Bela and Deni!). The Lonely Planet advised us not to miss out on a backwaters house boat tour, despite the fact that the price would be about 50 times more expensive than anything we’ll have done so far in India. Let me reiterate their advice: you have to do this if you go to Kerala, you won’t be disappointed! 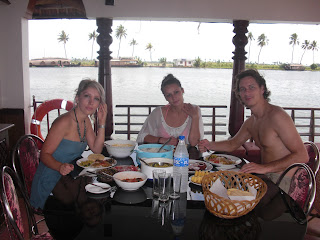 We got on the houseboat around noon, put our things in our rooms and slipped into our houseboat attire: shades and bathing suits! Our captain took us to the middle of the lake first so we could cool off with a swim. Getting into the water wasn’t hard; swimming in the water on the other hand brought back memories of Indiana Jones trying to cross the river of man-eating crocodiles in the Temple of Doom. Our fears got the better of us, so we climbed back aboard for lunch! 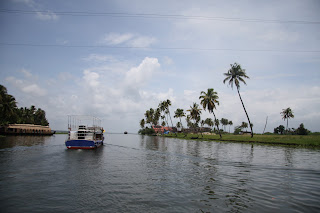 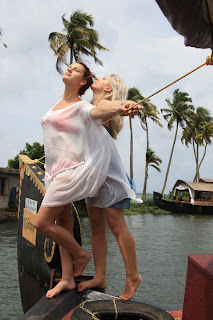 The rest of the afternoon we tooled around the canals, listened to Bollywood music, read books, took pictures, and meditated. If you ever go to India, do make a stop in Kerala and tour the backwaters. Thanks to Bess and all the Indian friends who told me to come here! Thanks also to Antony who hosted me on Saturday night. 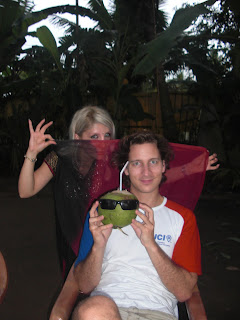 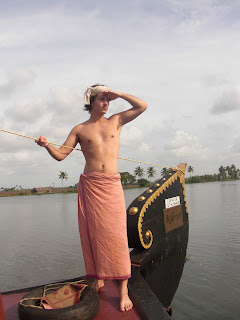