When I arrived in Bangalore, it was pouring rain. I took the bus to the terminal stop, which is next to Vijay’s place, my host from www.CouchSurfing.org. When Vijay pulled up, I was pleasantly surprised: he was riding a 1993 Enfield motorcycle, with a military khaki paint job and side car to boot! One-of-a-kind in Bangalore, that’s for sure.

We went back to Vijay’s and had a nice talk over whisky and dinner. He told me about his wife and new-born son, who were staying with her parents for a while, his furniture design and manufacturing business, and his hobby: creating bicycles out of bamboo. Not only had I probably met the only guy in Bangalore with a side-car, but also the first Indian to make a bicycle out of bamboo! Check out his site: http://handcraftedbikes.blogspot.com/

On Saturday, we met with a potential business partner of his for some late morning beers and cigarettes at a private fitness club. I was praying to god we wouldn’t have to work out afterwards! Then we went for a drive to M.G. Road, met some German students in the street and got another beer at a classic rock joint with Led Zep, Frank Zappa, Rolling Stones, and Grateful Dead posters, among others, plastered over every wall and stacks of cassette tapes to hammer home the authenticity of it all. Then we a late lunch of Tibetan food, ran into the Germans again, and went for coffee.

That night, one of Vijay’s friends who works as a PR consultant, was having a small party and Vijay brought me along. I met a lot of nice people there and had some interesting discussions about spirituality in India. Interestingly, they talked about Art of Living which I would learn more about in the coming days.

On Sunday, we went back into town with the sidecar and had an excellent lunch at a famous local joint called Nandhini’s Palace. An assortment of dal, veg curry, raita, and other tasty dishes are served on a banana leaf and you eat the whole thing with your right hand. After stopping for coffee, we started to head home but it was early and we didn’t have to go to Vijay’s employee’s wedding until late that evening, so we turned around and went back to M.G. Road. 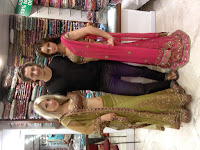 Just before we were about to park, I saw a girl sitting outside on the steps of a shop. I smiled at her, and she smiled back and waved. The only sensible thing to do in a situation like this is to go up and talk to her, so I did just that. We introduced ourselves and it turns out that Deni is Albanian, studying in Norway and currently doing field work with poor children in Bangalore. I think I impressed her with my knowledge of Albanian language by telling her “pune mbare!” which means “good luck with your work” (something I picked up last year when I spent a few days there en route to Lake Ohrid in Macedonia).

Deni was at a saree shop trying on dresses with her friend Bela, another Albanian, and she invited us into the shop to meet her friend. At some point, we let slip that we were going to a wedding and Deni shamelessly asked if they could tag along. Sure! 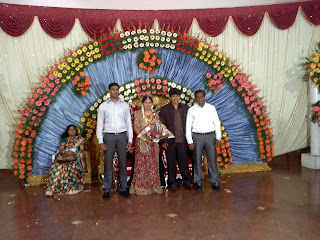 We picked them up an hour later and went to the wedding. I’m not sure if it was because we got lost and arrived rather late, but this was definitely the shortest wedding reception I’ve ever been to. We went into the main auditorium, met the bride and groom who were standing in front of a large floral arrangement, gave them some gifts, and then took pictures with them. As soon as the photographer had taken pictures, everyone started asking us if we had eaten yet, gesturing towards their mouth with fingers pressed to their thumb. As we hadn’t yet eaten, we made our way downstairs and had a delicious banana leaf meal like the other day. Once we polished that off, Vijay told us that that was all there was to it, time to go!

During the week, I got a chance to visit Vijay’s factory and see some of his designs and the bamboo bike. My personal favorite was the small seat/stool made from used tires. I also went with Bela, Deni, and Azzam to the world-famous Art of Living ashram and learnt more about Sri Sri Ravishankar. We got a chance to meditate; I was either really good at it or sleeping because I don’t remember much. Deni also took me to the school in the slum where she was working to meet some children. I was very impressed by the kids’ level of English and their eagerness to talk and find out all about us.

Unfortunately, I didn’t have enough trainees for the trainings I scheduled. I would however like to thank Dolly from Evoma Hotel for helping me arrange a seminar room. On Thursday night, I conducted the second half of an online Wordfast training. Though this format needs to be refined, I definitely see a lot of potential in it.

Deni and I met Chitra from couch surfing for coffee one afternoon and had a really nice chat before going for a walk in the park. Thanks Chitra for contacting me out of the blue and meeting up with us, it was a real pleasure!

On one of the last days, Vijay introduced us to another friend of his, Sam Mohan who is an amazing photographer. He's the one who took the spectacular photos of Vijay on his bike (see above). His work is quite impressive and I definitely recommend that you check it out on his website: http://yolkstudio.com/

Bela and Deni had planned to go to Goa over the weekend but hadn’t booked tickets, so I convinced them to come with me to Kerala instead. I met up with them Friday morning, then we went for a coffee and Vijay joined us. At one point, Vijay asked, “What time is your flight?” To which we replied “4 pm.” With a look of consternation, he said “You guys should not be sitting here right now!” So we grabbed our things and rushed off to the airport, arriving minutes before the check-in closed.