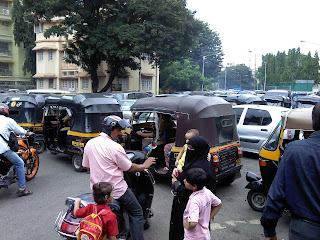 The first thing that greeted me when I stepped off the plane in Mumbai was the thick, humid air that condensed into beads of water—or was it sweat—on the back of my neck. I would be spending three weeks in India during the monsoon season so I had better get used to it fast.

I went straight from the airport to Manich’s place, my host, in Santa Cruz West. Manich is probably the best person who can give you a crash course on India politics, the economy, and Indian society in general. There is always a disclaimer, considering that India has more than 1 billion people and nothing is the same everywhere. You have to consider that each state has its own language, add in the mix of religion and different values and you get something similar to the melting pot in the USA, at least in Mumbai.

On Friday, some locals from www.CouchSurfing.org were organizing a walking tour of downtown Mumbai, so Manich and I joined them, at the end of the walking part, for dinner and ice cream. Thanks again DJ for organizing this and for the delicious ice cream! 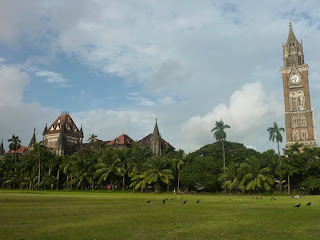 After dinner, we decided to go for drinks at one of the tourist hotspots. This gave me a chance to get to know some people from the group a little bit better: Aurore, an English teacher from France, who had just started a round-the-world trip, Jasmine, also from France and 19 years old, who would be spending a few months in India before going to Cape Town to pursue her studies; Narendra, from India, who owns an adventure team-building company; Rupsa, from India, who is a writer; Nachiket, from India, who works for a market research firm; and Javier, from Spain, who has been working in Mumbai for the past year or so.

After the drinks, the few left standing, meaning Narendra, Aurore, Jasmine, Rupsa, and I, went to the Zenzi Bar night club to dance. Thanks Narendra for taking us all there and for the thrilling ride through Mumbai! 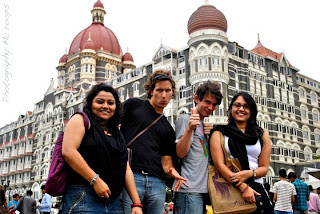 Saturday evening, Nachiket invited everyone to a Krishna dance recital at Iskcon (International Society for Krishna Consciousness). When I first got there, I went into the main temple area where there was a religous ceremony taking place, people singing and a little bit of dancing, but mostly clapping or foot tapping. I looked around for the group but couldn’t find them. I kept texting back and forth with Nachiket, until I gave up and went to eat a samosa. Only about a good half-hour later, I realized that they were in the auditorium! I finally managed to find them and enjoy the last part of the dance recital. 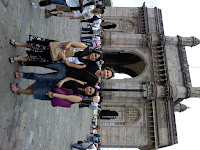 Afterwards, a few of us headed back to Manich’s place for a small party. Thanks Manich for hosting a party for everyone!

By Sunday, I was finally going to do some typical tourism: check out the Bollywood beachfront hotspot in Bandra West, take a local train, check out the Colaba area and the Gateway to India monument. I went with Rupsa, her roommate, and Robert, a young German student studying to be a doctor, for lunch in Bandra West, then down to the tip of Mumbai for pictures and a relaxing Sunday afternoon walk with Aurore and Jasmine. We ran into one of Rupsa’s painter friends on the boardwalk and another DJ/photographer friend, MC Roops, next to the Gateway to India. Thanks Roops for the great photos and collage! 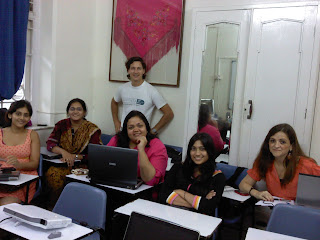 From Monday till Friday, I mostly worked, running a Wordfast training at the Instituto Hispania with six participants and an on-line training with four people from around the world. Nothing too exciting except that I did manage to forget to pick up my visa at the Vietnamese embassy.

Do you believe in fate? Strangely, I had said to myself before applying for my visa that if I had any problems getting it (I was worried about the time it would take), it would be a sign that maybe I should change my plans a bit. So when I failed to pick up my visa, I decided to return to Casablanca, get my car and drive it back to Nice, but more importantly, spend a couple of weeks with my son, Louis. Oddly, I had just met Lando in Mauritius who was planning on driving the car back to Nice for me, but I didn’t want to mess with destiny. It looks like the round-the-world trip is going to be somewhat hub and spoke as well! 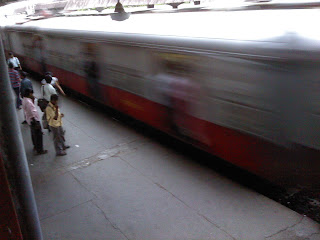 Next stop: Bangalore!
Posted by John Di Rico at 6:40 AM