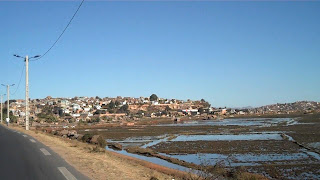 Have you ever dreamed of going to Madagascar to discover the exotic flora, landscapes, and fauna? I had, ever since I leafed through a guide book at the local library seven years ago. I was so excited that as soon as we reached the coastline, I had my eyes fixed on the trees, looking for lemurs swinging to and fro. At an altitude of several thousand feet, it probably would have helped to have had a pair of binoculars. The landscapes were breathtaking, however.

First time in Madagascar and first time after nearly three months of traveling that I would stay in a hotel. Though torn about not meeting more fantastic people and buying bednets, I was looking forward to having some time to myself–and by myself I mean me, my computer, and Facebook!

My taxi dropped me off at the Menhir hotel, just south of downtown Antananarivo (or Tana for short). Downtown is perhaps an overstatement. Tana looks more like a larger version of a village in Provence, with rolling hills interspersed by rice paddy plateaus and dotted with vibrant painted homes and buildings. The contrast with the azure blue sky, red earth, and lush green flora is strinkingly beautiful. 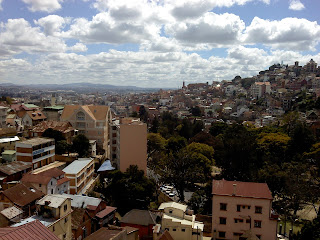 Back to the Menhir, this quaint hotel owned and operated by an ex-pat from Brittany named Dan, is located in a quiet neighborhood across from a police station. This reassured me as I was a little nervous at first because of the coup d’état in early 2009 and the unrest it ushered in. Ever since, inflation, uncertainty, and high unemployment have plagued the country.

Dan was very friendly and later introduced me to Clément, another ex-pat who works in the costume design business in Mada, but also runs the restaurant in the hotel for fun. In case you are interested, Clément is looking for someone with experience who would like to run the show during the week while he is at the factory. it is a Moroccan restaurant (he lived there for 10 years or so). If you are interested, go ahead and contact Dan so he can put you in touch with Clément!

Interestingly, Clément was the third person I have met so far on this tour who has been to North Korea. He lived there for several years, working for a textile company. If you make it to Tana, make sure you drop in for some of the best couscous I’ve had in awhile. It’s so good that even government ministers and people from the French consulate pop in for lunch (I saw several VIPs on at least three occasions). Thanks for the game of chess and the excellent food!

On Monday, I went into town and gave a Wordfast demonstration at the Centre National d’Enseignement de la Langue Anglaise (CNELA). Thank you Stéphane for helping me to organize this, thank you Mr. Rasoloheritsimba for allowing us to use your facilities, and thanks to everyone who showed up!

Upon leaving the CNELA, I was met in the courtyard by three members of JCI Tana: Mirana Olivia, Seder, and Tuv. We talked a bit and made plans for me to give a talk on Wednesday night during their general assembly about international opportunities in JCI. As we parted ways, I told them I was taking the bus back (dressed up in suit and tie with LCD projector and computer in hand) which thoroughly surprised them. Well it makes sense every way you look at it: mass transit cuts down on pollution, lessens traffic, and saves pennies. I think Mada has the cheapest bus fare I have ever paid: 300 ariary or slightly more than €0.10! 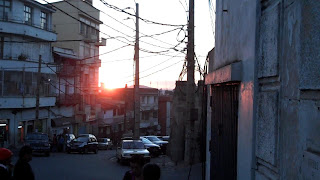 After a few nights relaxing stay at the Menhir, I packed bags and headed off to Paul P.’s place, a young French IT ex-pat working in Tana whom I had contacted via www.CouchSurfing.org. Before leaving the Menhir, I told Dan about my project and he jumped at the occasion to buy a bednet. A big thanks to Dan and everyone at the Menhir!

Paul was living in another part of town and his place was difficult to find. The taxi made a couple of wrong turns and we ended up on the worst road I have ever seen in my life. Off-roading through the Tunisian desert in a 4X4 outside of Tozer was a cakewalk in comparison with this! With help from local zebu herders, we eventually found Paul’s place.

I dropped off my things, then Paul and I headed into town on his motorcycle. I hung out in a hotel downtown working on a few things all afternoon until the JCI meeting that night. At lunch, I met Hery Andriamiandra, a former JCI member who is now the editor-in-chief of a IZA Magazine, a nation-wide monthly business magazine. Thanks for giving me a copy of the magazine Hery, it was a great read!

That night, I gave a one-hour talk during the JCI Tana general assembly about how you have to seize the day to be the change. I touched on some ideas picked up from other trainers and shared experiences from the past 4 years as a member of JCI, about how important it is to have a positive attitude, say yes to opportunity, the importance of envisioning in order to move forward and how we should challenge ourselves and others to be better in all aspects of our lives. The message seemed to get across as the members left with “Yes” on the tips of their tongues! Thanks Mirana Olivia, Seder, and Tuv for organizing this encounter.

The night was young so we went out for a bite to eat, some drinks, and a karaoke jam session. I was amazed at how good some of the members could sing. Thanks for the song, the laughs, and for teaching me some key phrases in Malagasy : mi fat fat be ianoa (all of you)! One more stop to meet up with Paul and his friends for a drink and then we went home.

The next morning, I left a suitcase at Paul's and got on the road for Toamasina with the intent to stop off in a virgin forest in Andasibe and frolic with those ever-elusive lemurs.

Next stop: Andasibe and Toamasina!
Posted by John Di Rico at 12:13 AM