I made it into Jo’burg bright and early Saturday morning and as I stepped off the plane, I suddenly realized it was winter! Brrr... The first thing I did when I got my suitcase was take out my jacket. When I opened it, I noticed that it had been “inspected” by airport staff or customs officials in Cameroon or South Africa. Actually, a better term would be “pilfered”. When I was about 10 years old, I made my first foreign currency purchase. I went out to the airport in Minneapolis and bought a $5 Australian bill. I’ve held onto it all this time, knowing that one day I’d make it there and be able to use it. Looks like some thief will be using it before me. He or she also made away with 40 Thai Baht (about $1). Lesson for us all: don’t put cash in your checked luggage.

After filing a complaint and filling out a police report, I was on the new high speed Gautrain heading to Sandton, Jo’burg’s sister city. From there, I got on the bus and went up to the Monte Casino to meet Adrian. Interestingly, there were only two other people on the bus. They recently put in place a public bus system and it hasn’t quite taken off yet among the locals. Maybe the fierce resistance from the taxi association and random drive-by shootings are scaring off potential riders.

Jo’burg was going to be the first city where I would reach out to complete strangers and ask them to host me. How? Using a website called www.CouchSurfing.org. I had contacted some people while I was in Morocco and at least 4 people had offered to host me during the week. First stop, Adrian and Louise’s place in Jo’burg North.

Adrian picked me up and brought me to their house. My room wasn’t ready though because they had a young German couple staying with them (couchsurfers as well!) who were leaving in an hour or so to drive up to Mozambique. After sending off the Germans, I went out for a relaxing walk in the park with Siobhan, Adrian’s daughter, Louise, and Crackle, their dog. Louise told me all about her and Adrian’s volunteer work as police reservists. I was very impressed and felt like I couldn’t have ended up with a safer family! I commend you both for your active involvement in your community.

That night, my hosts took me along to one of their friends’ house party. Nice evening with Brian and Randall, two philosophy professors from Canada, and Luana, a South African pilatis instructor. Thanks everyone for such a warm welcome on my first day!

Next day, another house party at GG and Sue’s house to celebrate Sue’s birthday party. What a great opportunity to meet a lot of interesting people! Adrian shared some stories about his trip to North Korea to purchase pottery. I loved learning that they have an entire movie set that replicates all the major cities around the world for TV news broadcasts. Had a chance to talk a little with Mike, a former world champion in no holds barred cage fighting and see some pictures from one of GG’s last motorcycle trips through Namibia. Very impressive. Finished up chatting with one of the local city councilors, Ralph, who invited me to their caucus the next day. Unfortunately, I couldn’t come as I wasn’t a party member :-(

Three’s a charm, Monday night, another birthday party, this time to celebrate Luana’s 50th. We had a nice dinner at an Italian restaurant and then went back to her place to drop off the dishwashing machine that her friends’ had all chipped in to buy her. Talked with Scruff who just started a mushroom growing business—not the psychedelic kind—and Marshall, one of Jo’burg’s captains of industry. Thanks Marshall for sharing some tunes from the new Beck album!

All of these parties gave me the chance to tell so many people about the bednets project; almost everyone asked me if I knew Kingsley Holgate. Hadn’t heard of him before I got to South Africa, but now I know. Want to find out more? Check out his site and bravo Kingsley for your action! 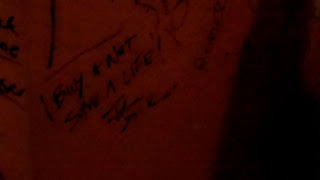 The next days were a little quieter. I spent most of the time working, and we went out to eat for local fare on Tuesday night. A nice local joint called where you can write on the walls (see really bad res photo to the left)! In a matter of days I had tried most of the country’s specialties: biltong, which I had mistakenly understood as bull tongue, or South African beef jerky; bunny chow, a minced meat stuffed half-loaf of white bread, and milk tart, a custard tart with cinnamon. Yummy!

Adrian and Louise were very kind and offered to let me stay the rest of the week. I must admit I was tempted because I was having such a wonderful time in their company. Some other people though had also been kind enough to offer to host me and were very excited to know that they’d be helping save lives that I regretfully had to decline the offer and move on. Thanks again Adrian, Louise, and Siobhan for a great experience in Jo’burg. That’s four more bednets to fight against malaria. I look forward to taking you up on the invitation to Mozambique and welcoming you in Nice one day!

Next stop: Jo'burg North chez Carol and Mike!
Posted by John Di Rico at 11:22 AM