Three more days in Cameroon, then off to South Africa. I thought it was going to be all work, play, work but it turned into work, disappointment, cheering up, work.

On Thursday, we planned to go with Annie and the kids back to Semé beach so I could teach them how to swim. That’s right, I used to be a lifeguard back in the day, just like David Hasselhoff, only less well known ;-) 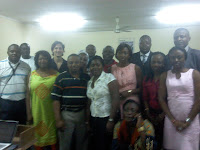 We got off to a late start but were eventually on the road with Serge, our driver from last time, his friend Hervé, who was driving this time since Serge’s car was getting fixed, Annie, and the kids. No sooner had we made it past the outskirts of Bonabéri when we got stopped by the military police for an ID check. Sh*t! Annie forgot her ID card. They let us continue on our way after pleading for leniency, but that didn’t help us from getting stopped again further down the road. This time they didn’t want to let Annie go.

We could have paid off the cop to let us go but I didn’t feel comfortable having to pay off corrupt officials all the way to the beach. It only breeds more corruption when you take part in it. So I went back with the kids and driver to get Annie’s ID card. By this time, it was too late to go to the beach so I dropped the kids off at home and then went back to free Annie.

Now it was time to settle up with our driver, Serge’s friend Hervé. Before leaving, we agreed to 25,000 CFA (about 50 USD) for him to take us there and back. However, we didn’t even go a quarter of the distance, didn’t get on the tollway, and cut our day short by at least three hours. Hervé, however, insisted on being paid the full amount. What Hervé failed to realize was that his short-term gain would come at the expense of his reputation, as well as Serge’s. Not only would we never call on Hervé again (like tomorrow, to take me to the airport), but we wouldn’t call on Serge either. Too bad for both of them. By the way, if you fly into Douala airport, make sure your taxi driver isn’t named Hervé.

That night, I gave a demo of Wordfast Pro to a group of 15 translators and Annie at the American Language Center, owned and run by Martin and Hermiane. Everyone was very enthusiastic about attending a training; unfortunately, it was taking place the next day and only one person could attend. Thanks Martin for hosting the demo!

After the demo, Annie and I met up with Ghislain and Ezekiel at the Total gas station. I’m not sure if it was because it was raining, but there were an awful lot of people in the station, hanging out, drinking beer and eating snacks; my first cocktail hour in a gas station!

We didn’t stay long, got in a taxi and went for a bite to eat. When we walked into the restaurant, we had to pick out what we wanted (fish or chicken) and negotiate a price before sitting down. The fish started at 17,000 CFA, but Ghislain somehow talked him down to 6,000! The waitress had just served us our food when Dagobert, last year’s JCI national president, joined us with a few friends. We had a delicious meal and a few more beers, just what Annie and I needed to cheer up after the fiasco earlier that day.

On Friday I trained Martin on how to use Wordfast Pro. We had a very interesting discussion about corruption in Cameroon and he told me a few stories about people asking him to inflate prices for lessons so he could pay them kickbacks. I very much appreciated Martin's refusal to buy into the corruption and his ambition to run a clean, ethical business. I had spent nearly two weeks in the country and was amazed by how generous and lively the people were. If, however, there was one thing that Cameroon could work on to be better, I think the country's leadership should definitely focus on stamping out corruption. 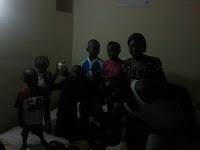 It was getting late, I had to run home, get my stuff together and get to the airport. Ghislain offered me a beautiful wooden statue that I unfortunately couldn’t fit in my suitcase. So I asked him to hold on to it for me until I come back! Thanks again Annie, the kids, Emile, Ezekiel, Michel, Harly, Roland, Bruno, Alem, Royene, Hervé (the soccer player!), Dagobert and Ghislain for such a wonderful time in Cameroon. A special thanks to Ghislain, Annie, Harly and Michel in particular, that’s 12 more bednets for 12 more families.

Next stop: Johannesburg, South Africa!
Posted by John Di Rico at 11:05 AM