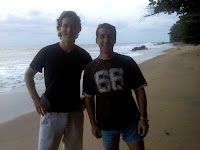 I figured I should try to do at least a little tourism while in Cameroon so I checked out the Lonely Planet online to see what there was to see... Number 2: Mount Cameroon. Been there, done that. Number 1: Kribi.

Kribi is the tourist hotspot of Cameroon. White sandy beaches, fiesta, fish and more. It just so happened that when I was about to clear customs upon arriving in Douala, I let someone use my pen to fill out one of the forms. We exchanged a few words, and he gave me a phone number in case I made it to Kribi. Ok, so now I had a contact in Kribi, a French man named Michel, who apparently ran a furnished apartment rental service there.

I called Michel bright and early Monday morning (a little too early, sorry about that Michel) to find out if there was any availability at the Gîtes de Kribi for the evening as I was planning on coming later in the afternoon. He told me he would have to check with the staff and politely asked me to call back in a couple of hours. So I did, around 9:30 am, and he told me that they were fully booked; however, I could crash at his place on the couch if I wanted to. Nice! I’ll be there in a few hours.

It took me more than a few hours to get there, but that wasn’t the bus’ fault. In fact, the bus left an hour ahead of schedule. I’m glad I didn’t stray too far from the station despite having a good hour and a half to kill. 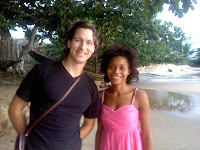 I finally made it to Kribi around 4:30 pm, hopped on a motorcycle, and met up with Michel and Harly, Michel’s girlfriend, at the Gîtes. It turns out, Michel and Harly don’t own and run the Gîtes, but are staying there as semi-staff for 6 months. Michel met the owner, a man from Brittany like Michel, the last time he was in Cameroon. He then did some renovation work on the guy’s house in Brittany and as compensation, gets to stay at the Gîtes.

We had a beer and talked for a little bit, then went out for a nice walk along the beach to catch the sunset. Harly made a delicious chicken dinner and we discussed business opportunities in Cameroon. Michel came up with a great idea for a non-profit organization: collecting old motorcycle helmets from Europe (helmets are good for a limited time only) and selling them (to cover transport costs) in Cameroon. Considering the high rate of motorcycle related accidents and deaths in the country, this idea holds a lot of promise. 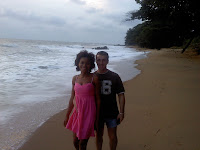 The next morning was overcast but the sun finally came out in the afternoon, so we went down to the beach for a swim. Then I went back to Douala as I had some work to do on Wednesday. A big thanks to Harly and Michel for hosting me and for the interesting discussions. I wish you both the best of luck and hope to see you again next time I’m in Cameroon!
Posted by John Di Rico at 10:29 PM