While I had malaria pretty much under control, my gastrointestinal problems started to worsen by Thursday. I guess this is what you get when you drink the local water, put ice in your whisky, eat fresh fruit and vegetables, and probably swallow a bit of well water when you’re this far south in Africa for the first time. Thanks again to Valérie for her quick counsel by SMS!

That evening we went out to a local restaurant to celebrate Ghislain’s birthday. I got a chance to meet his colleagues and see a few other Jaycees including Emile, Ezekiel, and Bruno. We had a nice little party going, Emile had us on the floor laughing with joke after joke, until a couple of local comedians popped in. Apparently, comedians go around to restaurants and tell jokes for a living every night, in the hopes of one day making it big. After quite a few drinks, jokes, songs, BBQ chicken and fried plantains, we closed out the night at the Crystal Club.

We hit the road on Saturday to visit Mount Cameroon and Limbé. Mount Cameroon is an active volcano that is a little over 4000 meters tall and right next to the ocean. It literally shoots out of the sea. Unfortunately, you can’t see anything during the rainy season. Oh well, another reason to come back to Cameroon I guess. We did, however, go on a short hike up to some waterfalls and caves. Thanks Alem from JCI Buea for joining us!

Though we had only planned to go to Mount Cameroon, we convinced our driver to take us further to Semé Beach in Limbe. When we got there, we were supposed to pay 1500 CFA each, or $3, to get in and get one free drink but for some reason or another, they let us in for free. Semé Beach was packed with vacation goers. There were people swimming, playing volleyball, and there was even a game of human foosball going on. Shortly after we arrived, Guiness started bringing out beers and soft drinks and then gave them out for free. Thanks Guiness for the great party!

It was getting late and time to head home, but first, we had to stop in town to say hello to JCI Limbé’s past president, Royene. It was only at this point that I realized we were in the English speaking part of Cameroon, despite the fact that our guide on Mount Cameroon spoke English with us. In fact, Cameroon is a bilingual country with two official languages--French and English. It was a pleasure meeting you Royene, thanks for meeting up with us!

Finally, back to Sunday, the day we’ve all been waiting for: soccer and parliamentary procedure training. Unfortunately, we didn’t make it to the soccer game as we got back a little too late from the night club Saturday night. But we were up and ready to roll for the training. Emile Singeh, an international trainer, joined Ghislain and I to train the Bojongo Vétérans Football Club. I think this was a first for the three of us: no LCD projector, no flipchart, no white board, no tables, no chairs, and plenty of beer. Plus a great group of participants who were eager to learn and full of insights. Thanks again to everyone who participated, to Emile and Ghislain, and those who bought the beer! 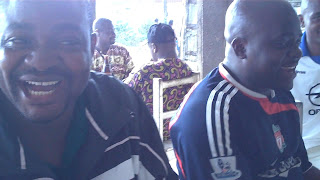 But wait, the day wasn’t over yet. After leaving the clubhouse, Jean-Pierre, the veteran of the veterans and high school teacher, invited us for a few more drinks and sandwiches in the bar next door. He was quite pleased with the training and sincerely hoped that his association would be able to apply what it had learned. It started to get dark so we piled into the President’s Mercedes (almost identical to my lonely Mercedes in Casablanca, desperately seeking a driver who enjoys long rides through the desert under a moonlit sky and dreams of one day returning to the French Riviera...), went home, got cleaned up and then went over to another soccer player's house called Hervé. A nice simple visit, then back home to rest up for the week ahead.