The plan was to drive down to Tarifa at the bottom of Spain, take the ferry, and somehow connect with Bess in Tangier later that evening. Again, still no phone (had the phone but had to wait until Tuesday to get international mode) and no more GPS once I get to Morocco.

I stopped for lunch and information after being on the road for about 4 hours and learned that the port in Tarifa wasn’t allowing cars and that I would have to go to Algeciras. Ok, no problem, I hadn’t got my ticket yet and I was still on the right track.

I rolled into Algeciras in record time. In fact, I had the time I needed to try to get the Western Union cash transfer I was waiting for. I parked and started running around from place to place to find a phone I could use to call a toll free number and get the codes from Visa. Pay phones don’t allow you to call toll free numbers in Spain. I finally found a travel agency who would let me use their phone and got Visa on the line but it took forever. I waited on hold for 20 minutes, then decided it was time to get back to my car.

Perfect timing. As I went back to the car, I saw a tow truck, policeman, and quickly realized they were towing my car! Oh shit, pardon my French, this is not good. How would I get it out of the impound lot with no registration papers (see Brussels blog), driver’s license and no money to pay the three parking tickets I got in Madrid? I don’t know what I did but I managed to plead with the policeman in a mix of my 25-word Spanish vocabulary, French, English, and non-verbal gestures. While trying to explain that my papers were stolen, I mimed someone trying to steal his wallet. Except there was no wallet, just a gun. Not a good idea.

The policeman accepted my €35, made a note that I paid in part and let me go with my car. Whew! Now I just had to get to Tangier and find Bess.

I met Bess through her husband Jon, another former English assistant I had the pleasure of meeting ten years ago and with whom I recently made history in Washington DC during the Obama inauguration. Obama was making most of the history but we did our fair share, too. Anyways, who cares about Jon, back to Bess.

Bess is studying Arabic and plans to teach national strategic decision-making to high ranking military officers. She is on a scholarship in an intensive Arabic program at the American School in Tangier for the summer. This is where I knew I could find her.

Night fell while I was getting through customs at the port. Great, I was given two different Moroccan SIM cards at the port, now I could call Bess. Not quite, stupid phone was blocked. I asked one of the guys giving out the cards if there was a way to get it unblocked. He told me I could go to Derb Ghallif once I get to Casablanca to get it “flashed” so it will work with any SIM card I want. Well that’s not going to help me now, “Can I use your phone to call a friend?” 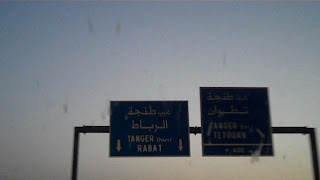 One of things I really appreciated in Morocco was everyone’s willingness to help you out if they could. Sure enough, he gave me his phone; unfortunately, Bess didn’t pick up. No problem, I’ll head into Tangier I thought to myself and ask for directions when I get there. I got there 30 minutes later, but wish the highway exits were more explicit: you have East Tangier and West Tangier, no Center.

I could feel I was getting close, or maybe lost, so I stopped at a public phone boutique to call Bess again. Still no luck. I did manage to talk to Said, a friend of Nezha’s friend Djamai (more on them to come), but he wouldn’t get out of work until midnight. Time to ask for directions. The American School of Tangiers, sure, just go straight here, through the round about and up the hill. Then stop and ask for directions again. Ok. After a series of consulting my Moroccan GPS (random helpful people on the street), I pulled up in front of the school. The gatekeeper had me write down Bess’ and my name on a newspaper and disappeared. He reappeared moments later followed by Bess!

After meeting her classmates, roommate, and program director, we went out for some tea and got lost. We thought we were at the Rain Sky bar but it turns out we ended up at its copycat a block or so away. We eventually made it back to the dorms and chatted with Maya and Nate. It turns out that Nate is a former English teacher and used to live next to Nice. He explained how he tries to encourage young people to spend some time abroad teaching English. I couldn’t agree with him more. I had some of the most important, memorable experiences of my life teaching in France and Vietnam some time back.

As for the picture you see above, I couldn't resist. The pedestrian crosswalk lights are animated in Tangier. The little green man starts walking slowly and gradually works his way into a full sprint before turning red!

We had a nice big breakfast the next day with some other people from Bess’ program and then parted ways. I want to thank Bess and Adriana for helping me find a place to stay in Tangier for the night and wish everyone the best of luck with their Arabic studies!