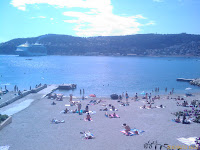 Looks as if this round the world trip is turning into a round in circles trip! Why back to Nice? That's simple: family. I've been meeting a lot of people, telling them about this adventure and many of them think it is amazing; some are even envious. However, it isn't all as easy and fun as it may sound.

The morning I left Nice back in May, I dropped Louis, my 4 and half year-old son, off at school. I'll never forget the expression on his face and him saying to me that he's going to miss me. As I walked away towards the car, the tears welled up in my eyes. I didn't imagine how difficult it was going to be to leave him. Sure, we have Skype and get a chance to see each other often but it's not the same as a hug, holding hands walking down the street, swimming in the sea, laughing together... 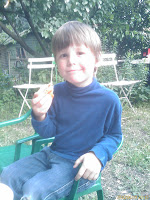 I wanted to get back to Nice before getting too far away. This was the perfect chance to kill two birds with one stone since my mom and her boyfriend Danny were passing through Nice on their European tour. The first night back, I got in very late and slept on the floor of Louis' room. Early the next morning, he woke me up by caressing my face; the best way in the world to be woken up!

On Saturday, I took Louis to see his first World Cup soccer game (mine too for the 2010 edition!). We met up with our Dutch friends Chantal and David and Jacob to support the orangemen. Later that night, we went to Chris' ginguette garden party and met a lot of nice people. Thanks Chris for inviting us! Sorry to all my friends in Nice that I didn't see. I wanted to spend as much time with family as possible. I may end up back in Nice for another visit with Louis this fall before he comes to the States to join me for part of the tour... I'll keep you posted!

Thanks to my Mom, Louis, Danny for the great time at Marineland with the dolphins, killer whales, sharks and other marine life as well for the rest of the time we spent together. And a special thanks to Anaïs for hosting me during my stay.

Next stop: back to Amsterdam for the main course!
Posted by John Di Rico at 10:57 AM