The moment we’ve all been waiting for (and by “we” I mean Delphine, Valérie, Jacob, Maxim, Erik and Charlotte, all members of JCI Pays Niçois): the 2010 JCI European Conference in Aarhus, Denmark! This was extra special for us since both Jacob and Charlotte come from Denmark and what better way to discover their country than at an international conference with more than 1000 other young active citizens from around Europe...

Erik and I left Potsdam together and arrived just in time to meet the others at the train station and take everyone to their respective lodgings. A big thanks to Delphine and Jacob for exchanging their apartment in Nice for an apartment in Aarhus. It was great to feel almost at home during our entire stay, with a big table for breakfast and great music (finally got to listen to an album from the Black Rebel Motorcycle Club, 10 years after I saw them open for Spiritualized in Salt Lake City...).

The theme of this year’s conference was “learn, explore, share” and I think this aptly sums up the 6 days we spent in Aarhus. We kicked off our stay exploring Den Gamle By, literally “Old Town”, which is a replica of historic Danish village life. Whenever an old building in Denmark is slated to be torn down, if it has historic value, they take it down brick by brick and reassemble it in this park in Aarhus. Exceptionally well done, but what else could you expect in the land of legos!

The exploring continued Thursday afternoon with the public speaking competition on the topic “let us be the change”. I had the privilege of representing France and competing with some brilliant speakers. Congratulations to Solveig Malvik from JCI London who went on to win the competition and will represent Europe at the World Congress in Osaka, Japan!

The sharing had already begun Wednesday night with a fantastic welcoming party by our hosts the Danes, but I must say that the Germans took it to the next level with their party down at the docks in an old hangar on Thursday night. Try to picture a thousand people dancing with painted smiling faces, hagermeister and delicious German beer, sausages of every stripe and color, world cup soccer, smoke and lights, and music to keep you dancing till 4 in the morning! 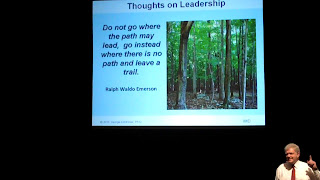 I ended up learning the most on Friday morning. I am so happy I attended what I think might as well have been the best talk of the conference given by George Kohlrieser, Professor of Leadership and Organizational Behavior at IMD Business School in Switzerland, psychologist and professional hostage negotiator. George gave us quite a few insights on what it takes to be a leader. The things that stick out most in my mind however are that people aren’t born leaders. About 95% of being a leader comes from experience and learned skills. We also learned that people aren’t naturally opposed to change, but rather to the pain and fear of the unknown. I see this a lot in the translation industry. Translators are like nervous hens when you start talking about machine translation. They fear that they are going to lose their relevance in the near future. Only when they understand the benefit of change (such as embracing machine translation to become more productive) will they overcome the fear. Finally, he told us that meetings can be up to 70% more productive (meaning faster and better!) if you have everyone stand up. I can’t wait to try this during my next 6-hour Wordfast training ;-)

Later that day, members from the French delegation met with the Honorary French Consul in Aarhus, Jørgen Hansen, and the JCI World President, Roland Kwemain. This is a unique opportunity for JCI France members to meet with French ambassadors and other foreign service officials when attending international conferences. Mr. Hansen talked about Franco-Danish relations and trade. Annual French exports to Denmark amount to €2 billion while Danish exports are worth €3 billion. In Denmark’s biggest university town, with 40,000 students, less than 50 of them are studying French. I think that language is probably the biggest barrier to trade and that if France ever wants to balance its trade deficit with Denmark, they ought to learn more Danish. Perhaps it would be even more practical to learn English since virtually everyone in Denmark speaks it...

The rain finally let up on Saturday for the duck race and street painting events. Conference attendees purchased 667 plastic ducks for $10 each to compete in a duck race on the river through the city center. The proceeds from this action will be donated to the Nothing But Nets campaign. After lunch, Maxim, Valérie, Jacob, Delphine, Virginie and I did a giant mosquito street painting to promote an international sports challenge our JCI chapter is planning in the South of France next year. Proceeds from this event will help fund mosquito bednet purchases as well.

The conference ended with an awards ceremony and gala dinner, a great opportunity to share one last night of talking, laughing, dancing, and singing before saying goodbye. Thanks to everyone involved in the organization of this event (Danes and JCI World HQ), the French delegation and national board members for taking care of us all week, and the members who made this conference so cheerful, interesting, and fun! Looking forward to seeing everyone again in Osaka, Japan. 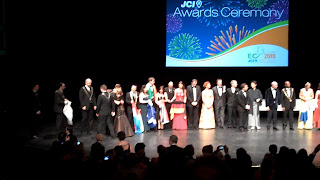 Next stop: Copenhagen!
Posted by John Di Rico at 2:52 AM