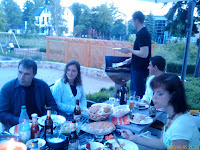 Potsdam? This story starts last summer at the JCI European Conference in Budapest. I met the members of JCI Potsdam over lunch one day and we had a very nice discussion. One of their members was in Nice later that summer, en route for Corsica, and I invited him and his friends to stay at my house in Saint Blaise for a few days. We had a great time that culminated in a Franco-Americano-German summer party till 3 in the morning!

Steffen insisted that I come to Potsdam with some Jaycees from Pays Niçois, so we organized a visit! Erik Bottier, one of our newest members joined us.

Erik’s flight was delayed but he did manage to get in. First stop, Steffen’s house for a BBQ. Perfect weather and delightful evening, with kartoffelsalat, beer, sausages, steaks, whisky and Cuban cigars. Thanks Tammy and Steffen for an amazing welcome dinner! 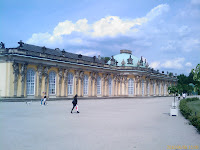 The next day, we had the privilege to have a guided tour of the Sanssouci Park. for those of you who don’t know, Potsdam is home to Germany’s Versailles, and even slightly bigger. Beautiful chateaus built by German kings over the past few centuries, the most famous being Sanssouci which was built by Frederick the Great, the enlightened King of Prussia and friend of Voltaire. Our guides were Didier and Jorn, an historian and staff member from the Chancellor’s cabinet. A special thanks to both of them for their explanations, translations, and good humor! Thanks Olaf, JCI Potsdam local President for organizing this day.

The weather was too nice to have dinner inside so instead we opted for a lakeside beer garden and picnic. Thanks Ilona, Christian, Steffen, and Erik for a lazy summer Sunday evening next to the lake!

Early Monday morning, Steffen and I picked up Erik and we went to visit a local company, Pro Potsdam. Pro Potsdam builds eco-friendly apartment buildings and offers solutions for retired persons to prevent domestic accidents, including curtain rods that can be lowered so you can put on and remove curtains easily. Jörn-Michael Westpahl, the company CEO and former JCI Potsdam and National Board member, took time out of his day to show us the concept. Thank you Jörn-Michael!

After taking a quick tour of the Potsdam city center, we stocked up on goodies for the picnic later that evening. We initially planned to go canoeing on the river before dinner but there was too much wind. Instead, we talked some handball players into a soccer game! We were on our way to a crushing victory (sorry Erik, who played on the other team) when Axel got hit in the face with the ball and looked like Rocky after round 3.

The rest of the members joined us for BBQ dinner after their JCI general assembly. We talked about meeting again next year, but in Nice just before the JCI European Conference in Tarragona, Spain. Erik and I and the rest of Pays Niçois are looking forward to welcoming JCI Potsdam next summer and taking you up to the mountains for a pre-conference outdoor adventure! We sealed the deal with a toast of fine champagne cognac.

Thanks to Suzanne and Steffen for hosting me for my stay in Potsdam and in particular to Steffen and the rest of JCI Potsdam for making us feel so welcome! See you next summer in Pays Niçois!

Next stop: Aarhus, Denmark!
Posted by John Di Rico at 2:45 AM